One cannot visit Israel without developing an appreciation for the diversity of its geography. We began our trip last week in the lush North with flowing rivers and the Sea of Galilee. We then travelled to the hills of Jerusalem and cool evenings. Now, we are in the desert, and soon we will experience the Mediterranean coast.

Our first stop was Masada. Due to the extreme heat, we were not allowed to climb up, so the cable car had to suffice. Touring the mountain and hearing it’s history was inspiring. It was there that we chose to have a very special Bar & Bat Mitzva celebration.

I am sharing a summary of what I said to the group as we stood on the top of the mountain surrounded by its history, its lessons and its legacy:

“Allow me to share a few words as we stand on top of Masada.

Israeli army soldiers who complete their training, climb to the top of this mountain and take an oath. They say the words –

It is a symbol of Jewish Freedom and Courage. It represents our desire to live free. To have the ability to practice our religion,  follow our laws and customs without fear. It also represents our willingness to defend these rights and privileges, and unfortunately, as we have seen thought our history, to make sacrifices when called upon.

Masada calls out to each of us to prioritize our Jewish lives. Be willing to make hard decisions to allow that part of who we are to extend its influence to all of the arenas we live in. We live in many different worlds: our home lives, school or work, our Jewish lives and our public lives which often are not in sync with each other. Masada also represents our challenges in our lives. We all have our personal Masada.

While standing here, let us join together and say several Tefilot (prayers) and sing several songs:”

After leaving Masada we traveled to Ein Gedi, the desert oasis, to hike, enjoy the beautiful scenery, and to cool off under waterfalls of fresh flowing water. After leaving Ein Gedi, we travelled to our hotel for the night – tired but very fulfilled.

Our day began, bright and early, with a long float in the restorative waters of the Dead Sea. Everyone was very careful not to get the salty water in his or her eyes and certainly not to swallow it.

After leaving our Dead Sea hotel, we began our drive to our next activity – Camel Riding. As we drove, we reviewed the Biblical story of the cities of Sodom and Gomorrah, which is along the way.  We stopped at a large rock formation where according to local history, where Lot’s wife was turned into a pillar of salt. Once there, we took the opportunity to collect salt rocks to bring home.

Part of our national heritage is camel riding. Although, we have switched our camels for Hyundai’s, Toyotas and other car makes and models, there is much Jewish history built around these large animals. In fact, throughout the Torah we have episodes of camel riding. One story that comes to mind, is when Rivka was being brought by camel to her future husband Yitzchak. The moment she saw him for the first time, she fell off the camel she was riding. So, of course a Beth Zion trip will include camel riding. Boy, did these massive beasts ride! No one got hurt and it was an experience to remember. After riding the camels, we were treated to a kosher Bedouin lunch. Afterwards, we had coffee in a Bedouin tent while listening to one of their tribal leaders. He told us his story ‘life as a Bedouin.’

For those of you who have never been to Mitzpe Ramon, it is a sight not to be believed. Mitzpe Ramon is a crater that is 70 kilometers long and 9 kilometers wide. The view from the rim of the crater is breathtaking. The Grand Canyon has nothing over Israel. We hiked along the rim of the canyon until the sun set over the distant Mediterranean Sea.

Tomorrow, half the group is going jeeping in the crater. The other half is dirt biking along the perimeter (others may chicken out and sleep in). Then we are off to play wheelchair basketball with injured soldiers at Beit HaLochem. It will be a meaningful day. 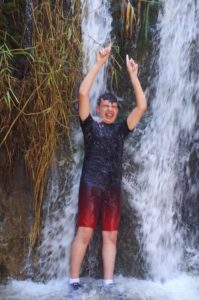 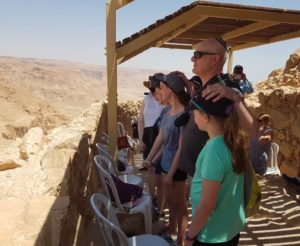 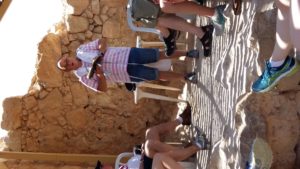 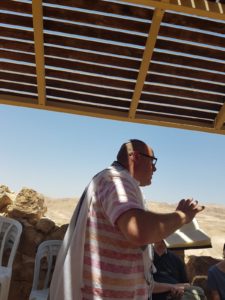 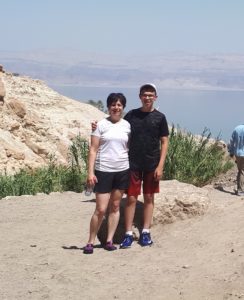 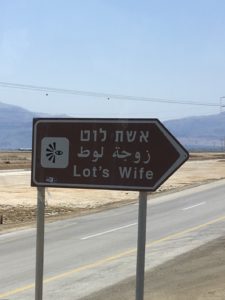 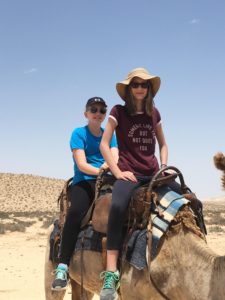 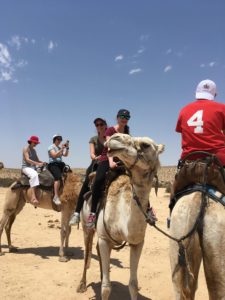 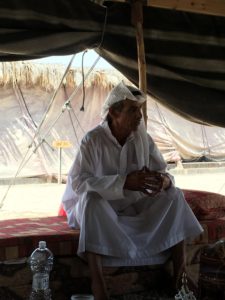 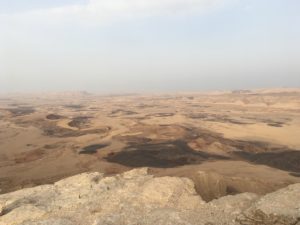