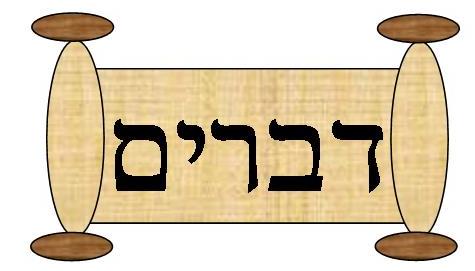 This Shabbat we begin the reading of the last of the Five Books of Torah – the book of Devarim. In this book, Moses is the speaker as indicated by the fact that it states Hashem spoke to me” (1:42, 2:9, 3:2). Whereas in the rest of the Torah discourses begin by stating “Hashem spoke to Moses”. According to Nachmanides, the book of Devarim may be divided into three main sections: 1) 1:1-3:29. This section contains the words of reproof to the people. He discusses the experience of the children of Israel – the first generation – those who left Egypt and how they stood on the threshold of the Promised Land only to sin and defer their entry for thirty eight years. This section also witnesses Moses addressing the second generation; those who were permitted to enter the land of Canaan. 2) 4:1-26:15. This division contains the main subject matter of the book – a recapitulation and elaboration of the statutes and ordinances. 3) 26:16-end of the book. This section concludes the book with blessings, curses, and a song.

The Torah reading begins by stating: “These are the words that Moses spoke to all Israel” (1:1). The word ‘these’ or in Hebrew ‘eileh’ is restrictive, especially in regard to what has been written previously. The Or Hachayyim explains the seeing Moses recorded in this book only words which he had spoken on his own initiative, the Torah wishes to emphasize that only the admonition recorded in this book were spoken by Moses on his own initiative. We are told in Megillah 31 that Moses personally composed the curses recorded in this book, and that even legislation which Moses repeated in this book he had not been commanded to repeat, but did so on his own volition. The Torah was concerned that we might conclude that just as Moses had felt free to say things of his own volition in this book, he might have done so in the previous four books. This is why the book commences with the “Eileh devarim”, “ONLY these are the words Moses spoke of his own volition, none other.”

Moses addresses the judges of the people and reviews the laws of how to deal justly and rightly with the people that come before them. In our parshah, we have directives of how judges are to judge, and later on in Devarim, we have more instructions. It states later on in Devarim: Thou shalt not pervert judgement; thou shalt not respect persons” (Devarim 16:19). Similarly, in Leviticus 19:15 it states: “Ye shall do no unrighteousness in judgement; thou shalt not respect the person of the poor, nor favor the person of the mighty, but in righteousness shalt thou judge thy neighbor.” Nechama Leibowitz , in her introduction to the book of Deuteronomy comments that our Sages have taught us not to regard any text in the Torah as merely repetitive, and they elicit for us the separate and exclusive messages of each word and phrase. She examines the implications of the repeated references to favoring the “poor” and “mighty”. The word “poor” does not only mean the destitute in worldly goods. Here is the interpretation of our sages on the text in Exodus 23: If a disreputable and a decent person stand before you in judgement do not say that since he is a disreputable, I shall view his cause unfavorably , but “thou shalt not pervert the judgement of thy poor” – he who is poor in good works (mitzvot). The judge, Leibowitz explains, has to limit his consideration to the parties standing before him in court and take no account of a person’s past, but weigh up the matter objectively on the basis of the facts presented to him. We find a similar duplication in the case of the admonition not to favor the poor man. In Exodus, we are bidden not to favor the poor man in his cause; in Leviticus not to respect the person of the poor nor favor the person of the mighty. Malbim, who specializes in clarifying the subtle differences in apparently synonymous expressions in the Torah directed his expertise to explaining our text: He says that the phrase ‘nesi’at panim’ (“lifting up the face” translated in our text by “respect the person”) implies overlooking some transgression or unsavory matter. The word “favor” comes from a Hebrew root meaning external beauty (hadar) referring to whatever is attractive in man’s eyes. It is the way of the world to make allowances for poverty and to pay respect to external appearances. The Torah therefore forewarned us against both these pitfalls. But it could be argued that though forbidden to make allowances for the poor in the question of a lawsuit, it is permissible to pay him honor and give him respect, so that his opponent should forego some of his claim. For this reason, the Torah states that it is forbidden, too, to favor i.e. to honor the poor in his cause.