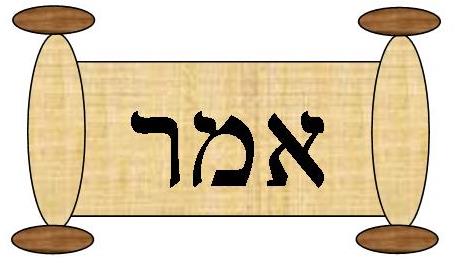 Besides the cycles of festivals and Sabbaticals that give time its rhythm, the world is also governed by cycles that are often not apparent, because one generation does not know what happened in previous generations and therefore cannot understand how what happens today is cyclically rooted in what happened earlier.

To understand the incident of the MEGADEF (“blasphemer”) in the closing section of our parashah (Leviticus 24:10ff), it is necessary to understand that “the son of the Israelite woman who was the son of an Egyptian man” was in fact the issue of an illicit relationship. Our rabbis teach that Shulamit bat Divri was the wife of the Israelite whom Moses saw being beaten by an Egyptian the first time he went out to visit his brothers. The Egyptian would daily drive the Israelite out of his home and send him to his labors, thereafter going in to his wife. (See Rashi on Lev. 24:10 and on Exodus 2:11).

There is a deep counterpoint in the positioning of this episode in parshat EMOR, which centers on the special purity demanded of the priests. Shulamit bat Divri is the exemplar of the opposite: immorality. While the holiness of the priesthood requires separation and the making of distinctions between pure and impure, fine and blemished, she sought to erase distinctions, greeting everyone with a naive “Peace be upon you, peace be upon you”. As if friendly chatter is enough to turn evil into good. It was Shulamit bat Divri’s endeavor to erase distinctions that laid her open to the immoral relationship which led to the birth of the blasphemer. The latter, however, discovered that, whether you like it or not, this IS a world of distinctions. While the blasphemer was an Israelite through his mother, he had no tribal affiliation, since this comes only through the father. Accordingly the blasphemer had no place in the Israelite camp.

Rabbi Yehoshua Greenbaum comments: Contemporary political correctness will cry out in the voice of Shulamit Bat Divri that he should have been given a place — isn’t it unfair that he should be excluded because of a quirk of birth? Endless similar questions can be asked about other commandments in our parashah. Why should a blemished priest not be allowed to serve in the Temple? Why should a divorcee not be allowed to marry a priest? etc.

Rashi brings a midrash that the blasphemer “went out” (Lev. 24:10) in the sense that he departed from the Torah: he mocked the idea that the Sanctuary Show-Bread (subject of the preceding section), which was eaten by the priests when it was nine days old, was a fitting institution in the Sanctuary of the King (Rashi ad loc.). The blasphemer could not accept G-d’s Torah the way it is. He wanted to adapt the Torah fit his own personal views.

There was a way that even the blasphemer could have found his place. As quoted at the outset, even a MAMZER TALMID CHOCHOM has precedence over the High Priest. If the blasphemer had been willing to submit himself to G-d and accept the position G-d put him in, he could have been saved. But he was not willing to submit and instead he opened his mouth and poured out a torrent of abuse.

Over sixty years previous to this, when Moses saw this man’s father striking Shulamit Bat Divri’s husband, Moses knew that there was no potential. “And he looked here and there and he saw that there was no man [that no man would come forth from him to convert, Rashi] and he struck the Egyptian” (Ex. 2:12). The rabbis taught that Moses “struck” him by invoking the Name of HaShem. It was precisely this name that the son of the Egyptian’s illicit relationship blasphemed. Prior to the Giving of the Torah, Moses inflicted instant justice on the father. However, after the Giving of the Torah, Moses was subject to the Torah like everyone else and he had to wait to hear from G-d how to deal with the blaspheming son.

The account of the punishment of the blasphemer includes related laws of punishments for killing and the damages that must be paid for inflicting injury to humans and animals. The cycles of crime and its penalties and payments revolve from generation to generation, but this is not apparent to the onlooker who sees only the here and now and does not understand what was before and what will come afterwards.