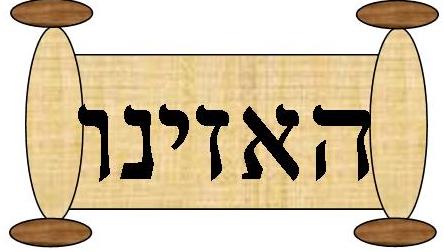 There are, however, according to Torat Moshe, other differences between Moses and Isaiah, which deserve our attention. Isaiah uses the term ‘dabber’ for both heaven and earth, whereas Moses employs the term ‘dabber’ only when he addresses heaven, whereas he uses the verb ‘amar’. Also, when referring to the heavens, Moses invites ‘ha-azinu’ – listen first, whereas he presumes that the earth will listen only after his speech has already been made (‘imrey phi’), or at least begun. Moses illustrates that a tzaddik can command heavenly beings, seeing that the latter do not enjoy freedom of choice. Even a tzaddik, however, cannot COMMAND a fellow human being, unless that human being is agreeable. A tzaddik even can use harsh language, i.e. ‘dibbur’ when addressing heavenly creatures. When he addresses earthly creatures – such as human beings – he cannot dictate, and there is hence the word ‘amirah’ – which is to say but in a soft language and tone. All of the above, Torat Moshe explains, was applicable to a person of the caliber of Moses. Isaiah, a lesser mortal Although a major prophet did not presume to address heavenly beings in so peremptory a matter. He would communicate only the word of God, not his own. Hence – ‘ki Hashem dibber’ in Isaiah 1:2, where he commanded heaven and earth only to listen to the word of God. If the Midrash Hagadol relates that heaven and earth arrested their orbiting when addressed by Moses, just as they had stopped orbiting at the time of the revelation at Mount Sinai, the meaning may be this: At Mount Sinai, the giving of the 10 commandments and the immediate direct guidance of God was so evident, that anything based merely on natural law, such as the motion of galaxies, ceased. Also, this served as a warning to Israel that should they fail to accept the Torah, the motion of the galaxies would become meaningless since God would destroy nature; having creating it only for the sake of the Jewish people accepting his covenant. When Moses calls on heaven and earth as witnesses to his warning to the Jewish people to remain loyal to their God and their Torah, he reenacts the events of the time of the revelation at Sinai in order to bring home his point. An additional reason for calling up the heavens and the earth as witnesses is that according to Torah law, the witnesses must be the first to execute any punishment decreed by the Court, based on their testimony (Deut. 17:7). It will be heaven and earth, which by withholding their bounty will execute judgment on the Jewish people, should they fail to heed Moses’ warnings.

If we compare this weeks parsha, Haazinu, to parashat Netzavim (which we read before Rosh Hashanah), it seems to be very similar upon first glance. It begins with the idea of God taking Israel under His wings, and Israel repaying this kindness by worshipping idols. This -of course- is followed by God punishing Israel for forsaking Him. Both parshas end with an instruction to do good deeds, in order to ensure only reward from God. The obvious question which arises is why is Haazinu different? What does it add to Netzavim? Also, how is it special in relation to all the different types of tochacha -rebuke- we have already seen in Deuteronomy?

Just by looking at the verses, it is obvious that there is a difference in the poetic style of the parsha. It is a shira, a song, which according to the Netziv, is the only part of the Torah which was written before it was taught. But the Ramban finds a deeper meaning to the verses, explaining the parsha as both an account of Israel’s history, and a prophecy of their future. He explains the following verse: “and Moses came and spoke all the words of this song…” – to include everything that will happen to Israel in the future. Ramban demonstrates how each section of the shira refers to a different part of Israel’s history. It starts with God taking care of us in the desert, conquering the other nations. Israel then forgot how it was who had helped them, and God proceeded to turn to avoda zara -idol worship.

Ramban discusses certain things which were predicted to happen in the future – i.e.: that God would disperse Israel to the four corners of the earth. He points out that the end of the shira states that God will take revenge on their enemies. He stresses that the accuracy of certain predictions is proof that this promise of revenge (or rather a promise of final redemption- which is how he understands revenge) will also one day be fulfilled.

These commentators clearly see Haazinu as representative of something more than a harsh rebuke. They realize that Haazinu is a story of Israel’s history and future. They see in it the ultimate comfort of the promise of redemption.