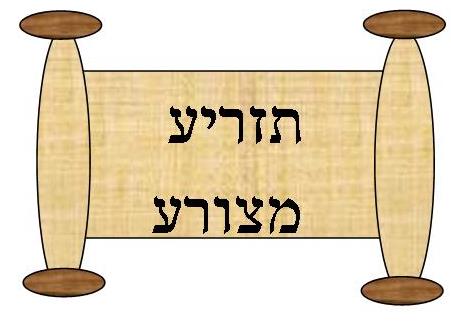 Rashi begins his commentary to this week’s parsha by noting that the halachot related to the tumah and taharah of humans begin in Parshat Tazria – after those of the animal kingdom were listed previously in Parshat Shemini. This order would seem to defy logic, as one would think that the halachot related to humans ought to have been placed before those of the other living beings.

Rashi quotes a Midrash, where Rav Simlai explains the reasoning behind this sequence. He maintains that in listing halachot, Hashem followed the order of creation – beginning with all the members of the animal kingdom (who were created first) and concluding with man (who was created last). The Midrash quoted by Rashi finishes with an additional thought. If we fulfill the ratzon of Hashem, says the Midrash, it is as if the world was created on our behalf, and we were therefore created last so that we would arrive to a ‘finished’ world. If we ignore the laws of the Torah, we are informed that even the lowly ‘yitush’ – a form of insect – was created before us.

This Midrash and the commentary of Rashi, however, seem to leave us with more questions than answers. First of all, what is the meaning of the Midrash regarding the insects preceding man in creation – and why was the ‘yitush’ singled out among all other insects? Finally, why should the Torah follow the order of creation when listing the halachot of tumah and taharah? The primacy – and responsibility – of man. Many meforshim note that the cryptic words of the Midrash are commenting on the role of man in the creation of the world. Humans are essentially offered a choice. If we follow the laws of the Torah, then we become the central focus of creation. After all, Hashem created this world so that we can serve Him and elevate our neshamot (souls). When one lives a spiritual life, and fulfills Hashem’s master plan, he or she brings meaning to the world and all facets of creation. This would be analogous to a customer who walks into a restaurant and sits down to a delicious meal – with all the cooking and preparing done on his behalf. In this scenario, this elevated form of man, whose neshamah rules over his body, arrived last on the scene during b’riat ha’olam to signify that the world was created with his service of Hashem in mind. The Midrash continues with the logical corollary of this reasoning. It states that if one does not fulfill the master plan of Hashem, he is no better than any of the other living creatures that populate the Earth. The moser ha’Adam min ha’behemah, the superiority of man over animal (Kohelet 3:19, tefilah of Yom Kippur), lies in our ability to control our impulses and harness our energies to a greater purpose. Delaying gratification and harnessing desires are qualities of the human race to the exclusion of nearly all other living beings. Failure to exercise these abilities blurs the distinction between man and the members of the animal kingdom.

Rabbi Yaakov Horowitz comments: “The Midrash is reminding us to live meaningful lives. We are not angels – nor were we created to live like them. We need to eat, drink and sleep properly. The Torah mandates that we nurture our bodies; that we exercise and refrain from activities that harm them. During our lifetime, it is our sacred mission to have a healthy spiritual digestive system as well – to extract the sparks of ruchniyut that are inherent in all areas of our lives, and remove the harmful elements. Doing so will result in an elevated living that places us in our proper position as the final element of creation – and the raison d’être for Hashem’s beautiful world.”

THIS SHALL BE THE LAW OF THE METZORA… HE SHALL BE BROUGHT TO THE KOHEN (14:2)

Both the onset and the termination of the state of tzaraat are only by the proclamation of a Kohen. If suspect markings appear on a person, they are examined by an expert on the complex laws of tzaraat—usually, but not necessarily, a Kohen; but even after a diagnosis of tzaraat had been made, the state of ritual impurity does not take effect, and the metzora’s banishment is not carried out, until a Kohen pronounces him “impure.” This is why even after all physical signs of tzaraat have departed, the removal of the state of impurity and the metzora’s re-admission into the community is achieved only by the Kohen’s declaration. The Kohen’s function as a condemner and ostracizer runs contrary to his most basic nature and role. The Kohen is commanded by G-d to “bless His people Israel with love”; our sages describe a “disciple of Aaron” as one who “loves peace, pursues peace, loves G-d’s creatures and brings them close to Torah.” But this is precisely the reason that the Torah entrusts to the Kohen the task of condemning the metzora. There is nothing more hateful to G-d than division between His children. The metzora must be ostracized because, through his slander and tale-bearing, he is himself a source of divisiveness; nevertheless, the Torah is loath to separate him from the community. So it is not enough that the technical experts say that he be marked by tzaraat. It is only when the Kohen—whose very being shudders at the thought of banishing a member of the community—is convinced that there is no escaping a verdict of tzaraat, that the metzora is separated from his people. And it is only when the one doing the banishing is suffused with loving concern for the banished person, that the penalty will yield a positive result—the repentance and rehabilitation of the metzora. There is another lesson here as well: it is not the fact of the tzaraat that renders the metzora impure, but the Kohen’s declaration of his impurity. In other words, no matter how terrible a person’s state may be, to speak ill of him is more terrible still. The Kohen’s saying that he is impure affects his spiritual state far more profoundly than the actual fact of his tzaraat!