Pope Francis, a Montreal rabbi and the importance of bridge-building 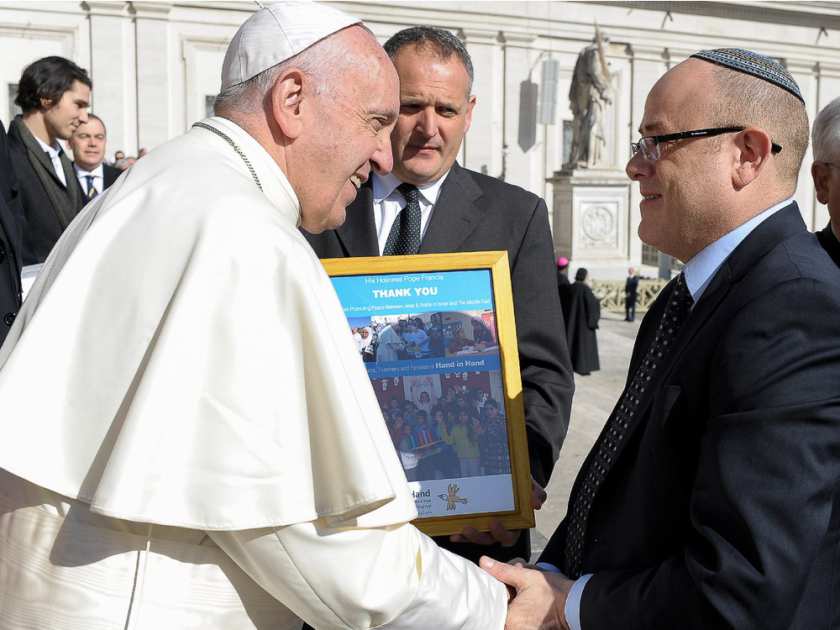 I recently returned from Rome where I had the rare privilege of an audience with Pope Francis.

Meeting the Pope is not a simple thing. Numerous levels of approval are required. It is necessary to have a valid reason. In my case, it was to meet with him on behalf of the Israeli Hand-in-Hand schools.

Hand-in-Hand began in 1997 when two Israeli educators, one a Jew and one an Arab, decided to create a school that would have as its mandate an equal student population of Jews and Arabs. Its mission was to create a shared society where Arabs and Jews could go to school together, learn to appreciate that there can be two narratives to the same story, and, most important, allow the children to grow up as classmates and friends, and not as enemies.

I believe in the mission of Hand-in-Hand and wanted to get the Pope’s endorsement for the organization.

As a Canadian, I believe in the values of peace and respect. As a humanitarian, I care about people of all religions and backgrounds. As a rabbi, I believe it’s a religious responsibility to make this world a better place for all of mankind. This is why Hand-in-Hand calls out to me and why I have made it my life’s work to support its cause.

During his visit to Israel in 2014, Pope Francis made an unscheduled stop to pray at the Israeli security wall. It was, as his aides conceded later, “a silent statement against a symbol of division and conflict.” However, many Israelis saw it as a propaganda stunt.

Those who were offended by the Pope’s prayer should not have been. If anything, I agree with him. Every time I pass the security wall when driving in Israel, I also feel pain. Even though I view the wall as a necessary reality (as it has proven time and time again to prevent terrorism), it is still a symbol of pain and failure. It represents two sides that have not been able to build a lasting trust for one another and it represents the extreme sense of incarceration that many residents living on the Palestinian side feel by the mere fact that there is a wall locking them into a specific geographic area, something the Jewish nation has personally experienced much too often. A necessary reality or not, it is a painful sight.

I met with the Pope because I want to make a difference in this world, and need the support of leaders of all faiths to do it. While there are currently six schools in Israel where Jewish and Arab children go to school together, there are 10 additional communities begging for such schools to be built. There are more than 1,000 children on the waiting list.

The best word I can use to describe the audience with the Pope is “amazing.” He is a humble and gracious man who is willing to take strong positions about his beliefs. Seating me among the cardinals and the bishops during the General Assembly prior to our meeting was a sign of the esteem he shows to clergy of different faiths. His is a bridge-building church.

When I met with the Pope, we discussed the issue of Jews and Arabs living together in a shared society based upon mutual respect and shared goals. We also discussed the work of the Hand-in-Hand schools and the role the children who attend these schools will play in building bridges between the two groups in the coming years. The Pope offered strong words of encouragement.

I walked away inspired. I hope to have future opportunities to meet with Pope Francis to discuss issues that are vital to both the Christian and the Jewish worlds. Knowing that we have a partner that represents such a large and powerful community can only be taken as a positive sign that there is a light at the end of our long tunnel.