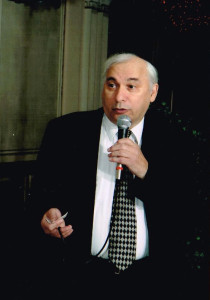 David Amsel, ז”ל, was a master teacher because he loved to teach. His style accommodated all, from the advanced student to the novice.  He encouraged questions and engaged his students in discussions with patience, tolerance, and charm. He appreciated humorous digressions and even made his own contributions. He brought to his shiur an eclectic range of other Talmudic sources, general Jewish wisdom, insights from the secular humanities as well as personal anecdotes. In practical  Jewish law, he liked to contrast the right-wing interpretations with his own contrarian positions, but always faithful to what he viewed as the authentic interpretation of Halacha. David was a good teacher and an enthusiastic student, with a deep commitment to facilitate and encourage others to learn.

The David Amsel Shiur is named in honour of David Amsel;  It will be lead by Professor Ira Robinson and takes place on שבת mornings, beginning shortly after the Rinat Yisrael Minyan kiddush.

The shiur’s subject matter is Gemara [the Talmud] a primary source for understanding rabbinic Judaism. The shiur is currently discussing the Tractate Bava Metzia. It is given in English and is open to women and men with all degrees of experience in Talmud study—even none at all.  It begins with the Hebrew and Aramaic text and aims to elucidate the text of the Gemara and to discuss the variety of conceptual issues, both legal [halakhic] and non-legal [aggadic], stemming from the text.