Picture if you will, Joseph and his boys rush in to see his dying father. He seats his boys to be blessed by Yakov with Menashe, the older one, to his right, and Ephrayim, the younger one, at his left. Then Yakov crosses his arms.

Yosef impatiently yells out, “The older one is on the right”.

There’s an urgency and impatience to Joseph’s tone.

Yakov corrects his son, “I know, but the younger one will be greater than the older one”.

This seems to be a dominant thread throughout the book of Breishit; most of the family dynamics in this book include the younger child surpassing the older one, leading to disastrous results.

Throughout this entire exchange, the boys are silent.

Many commentaries extol the beauty of the book’s first siblings that we encounter without sibling-rivalry, having Menashe being so proud of his brother and his eventual accomplishments. When we bless our sons to be like Ephrayim and Menashe, we want children to get along just like these brothers.

Instead, I want to offer an added dimension to this exchange. They were silent because of the love, respect and patience they had for their blessed grandfather.

In the later years of my grandfather’s life, he suffered from dementia, and there were times that he was confused. He thought my brother-in-law was his late son; there were days he thought I was my late mother. Rather than losing patience and angrily correcting him, we let him do things his way. I remember a time before dementia. A grandfather who gave me anything I ‘needed’. A grandfather who brought me to Cirque du Soleil with him. A grandfather who gave me countless rides around the city and took me every morning to say kaddish when my mother, his daughter, passed away.  A grandfather who had endless love, respect and patience for me and his other grandchildren. That is why when he made mistakes, we did not jump to correct and embarrass him, but we took it in stride. That is why I felt the need to say kaddish for him this year and write this d’var torah to keep his memory alive, and where he remains today, always close to my heart. 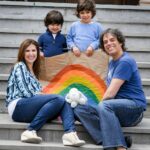